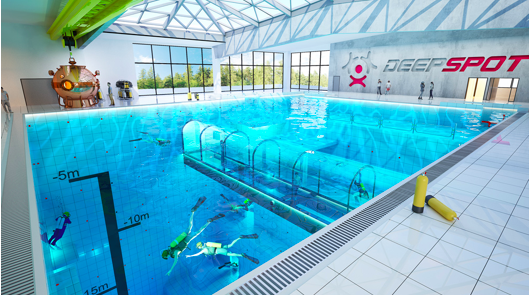 Mszczonów is about to become the most popular in the whole world thanks to the swimming pool that is being build in this small town located 50 km from Warsaw. There would be nothing extraordinary about it, if it were not for the fact that it is going to be the deepest pool ever built.

It will beat the current record by 5 meters, surpassing the swimming pool placed in Montegrotto Terme. It will be available for use already this autumn.

DeepSpot, as it will be called, is a new project of the company responsible for the very popular FlySpot tunnels, which are used for indoor skydiving.

Before Mszczonów we could have envied other European countries with such great facilities as NEMO33 near Brussels, or the Italian Y-40 pool, which are the destination of frequent trips by divers from around the world. They offer great infrastructure and are tailored from the beginning to the end to the needs of the underwater enthusiasts. In Poland we have a huge diving community, so the idea to create a project like that was just a matter of time. To fill the pool 8,000. cubic meters of water are needed, that is, as much as it is used to fill 27 pools with a length of 25 meters.

Mszczonów is not the only one going for the win. At the same time there is another swimming being build on the outskirts of London – called the Blue Abyss, which will be offering a depth of 50 meters, while the one in Mszczonów is planned for about 45 meters. Completion and commissioning of both facilities is planned for the next year.

However, regardless of the title of the deepest pool on the world, we are proud to see that the investment in Mszczonów has entered the implementation phase and work has already begun. If everything goes as planned, in the autumn of 2019, we will be able to enjoy the charms of this facility, and Poland will once again emphasize its strong position on the diving and freediving map of Europe.

It will be a complex open for all, professional divers will be able to dive in it, as well as complete amateurs, there will be attractions even for people who aren’t really diving fans. The investor has planned the construction of an underwater tunnel for visitors, as well as hotel rooms, a restaurant and conference rooms.