Worth to Visit in Gdansk, Gdynia and Sopot

Gdansk is a remarkable city owing to its over 1000-year’s tradition, outstanding architectural heritage and historical significance. Over the past centuries it has always been inseparably related to the sea. Situated at the intersection of the routes running from the east to the west of Europe, as well as from the north to the south, Gdansk contributed to the development of the international trade and became a long-standing part of the Hanzeatic tradition. The city’s architecture constitutes a perfect composition of various artistic stiles: Romanesque, Gothic, Renaissance, Rococo and Baroque.

The Dluga Street and the Dlugi Targ Street

The Długa and Długi Targ Streets which are also known as Trakt Królewski (the Royal Route) rank among the most beautiful streets in Gdańsk. The wealthiest Gdańsk patricians used to live there and almost every tenement house has its own interesting history to tell. The oldest preserved houses date back to the Middle Ages, but most of the buildings were erected in modern times. Tenement houses on Długa Street are typical Gdańsk houses with narrow facades topped with gables or attics, richly decorated with coats of arms, allegoric figures and silhouettes of ancient heroes. The most important secular buildings – the Hall of the Main City and the Artus Court are located on Długi Targ Street.

The Neptune Fountain has stood in front of the Artus Court since 1633 and is a symbol of Gdańsk. It was built on the initiative of the Mayor of Gdańsk, Bartłomiej Schachmann. The model was prepared by Peter Husen and Johann Rogge, and it was cast in 1615 in Augsburg. The design of the whole fountain was prepared by Abraham van den Blocke. The ornamented grill surrounding the fountain dates back to 1634. In the years 1757-1761 Johann Karl Stender redecorated the basin and the base of the fountain in the Rococo style, by adding a large array of sea creatures. According to one of the Gdańsk legends it was Neptune himself, who contributed to the creation of the famous Gdańsk liqueur called Goldwasser. He got angry at people throwing golden coins into the fountain and hit the water with his trident so hard, that the gold fell to pieces, forming small golden flakes which now shine in the tasty herbal liqueur.

The Crane over the Motlawa River is the most characteristic and unmistaken symbol of Gdańsk. Back in the Middle Ages, it was the largest port crane in Europe handling cargo and putting up ship masts. It also served as an uncommon city gate. The reconstructed driving mechanism inside, still in working condition, is an immense wooden wheel originally propelled by men literally walking in it. Today the majestic Crane, a fine specimen of the historic port facilities, sets an excellent background for the rich collection of the National Maritime Museum.

This Holy Trinity, Blessed Virgin Mary, and St Bernard’s Church was first erected, as a Cistercian shrine back in the 13th century. Reconstructed in 1350 after a great fire, it re-emerged in the Gothic style and has remained almost unaltered ever since. The Gothic interior was extremely damaged in the 1577 fire and was replaced with the Baroque fixtures we can admire today. Structurally, the cathedral is a triple-aisle, vaulted basilica built on the plan of the Latin cross. The Oliwa Cathedral is 107m long, which makes it the longest church in Poland. Its splendid decorative gems include the Rococo organ, dating from the period between 1763 and 1788. The organ was manufactured by Jan Wulf and Frydryk Rudolf Dalitz and when built, the instrument was considered the largest in Europe.

The Amber Museum in the Fore Gate Complex of Długa Street, Gdańsk’s popular barbican, continues its pre-war tradition, alluding to the Gdańsk inclusion collection located in the Green Gate, which was lost during World War II. The latest unique specimen in the nature collection of the museum is the second, known in the world, inclusion of Solifugae in amber. In the collections of world museums you will not find such a specimen. In the recesses of the museum you can learn the history of the formation of “Northern Gold” and inclusion, the medicinal use of amber, see a display of how it is crafted and finally beautiful collections, including the most precious objects from the collection of Georg Laue, which were made in Gdańsk in the 17th and 18th century.

The European Solidarity Centre is important institution on the freedom trail in a new, experimental form: it is not only a museum dedicated to the history of Solidarity and anti-communist opposition in Poland and Europe, but also a centre of dialog in the modern world; a meeting place for people who are close to the values of liberty and democracy. The heart of ESC is a grand exhibition arranged, which narrative allows everyone to find their own meaning and emotions. Visitors from Ukraine, the Czech Republic, Hungary and Germany also find their piece of history in the centre. But ESC is also a library, reading room and archives. 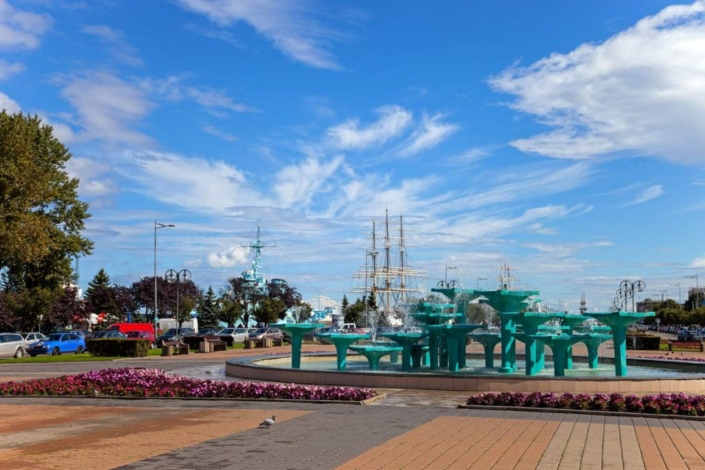 A city of the sea and dreams, that is how people picture Gdynia.

The decision to build a port in Gdynia was taken, after Poland regained independence in 1918. Transforming a sleepy holiday resort into one of Europe’s most modern ports was, aside from the Central Industrial Region, the biggest Polish investment project during the interwar period, a symbol of the maritime aspirations of the renascent state.

During the the communist Polish People’s Republic, Gdynia was a window to the world. It is from here, that famous tall ships:  Dar Pomorza, Zawisza Czarny, Pogoria  would sail out to sea, a realisation of dreams about voyages and distant countries reachable only by the very few.

Dar Pomorza also called the White Frigate, a beautiful three-mast ship with a noble silhouette built in 1909 in the Hamburg shipyard, is a legend of Polish sailing. In 1929, it was bought with public donations and handed over to the State Gdynia Maritime University. For over half a century, it sailed under the Polish flag, clocking in over a half million nautical miles, completing 105 voyages, calling at hundreds of ports and training 14,000 students. It was Poland’s sailing ambassador, taking part in tall ship races and regattas, a two time winner of the Cutty Sark Tall Ships’ Races. In 1981 it sailed off on its last voyage, to the Finnish port of Kotka.Today it is a jewel in the crown of the National Maritime Museum in Gdansk.

The Pier in Sopot

The Pier in Sopot is one of the symbols of the health resort. Its history going back to the idea of creating a resort in the small fishing village on Gdansk Bay. The idea was pursued by Jean Georges Haffner, who is the creator of the whole infrastructure of bathing and tourist attractions in Sopot, including the pier going into the sea.

The pier in Sopot is approximately half a kilometre long. It remains the longest wooden pier in Europe and was recently quite substantially modernised.

Bohaterów Monte Cassino Street used to be a road connecting two parts of Sopot – the Upper and the Lower. Since the beginning of the Sopot resort it has gradually transformed itself into an elegant street and then a pedestrian zone and an outdoor salon.

During the postwar period Monciak was a typical Sopot street, slightly sleepy in winter and livening up with every possible colour just before the summer season started. The most flashy and sophisticated makes of cars could be found there, driven by the wealthier citizens at 10 km/h, and shown to the audience with pride. There, in numerous cafes and pubs, led by the famous SPATIF, Polish art life flourished. The annual Sopot Song festival organised since 1964 ensured the presence of celebrities who could be met on Monciak.

Today’s  Bohaterów Monte Cassino Street has been closed for vehicle use for years and is the most popular street in the Tri-City. The famous cars have disappeared since then, celebrities are less likely to be seen, and it is slightly less glamorous, but it remains one of the most attractive places for tourists visiting Sopot.

Sopot Beach is the obvious attraction of the health resort. Four kilometres of beach, spreading from the southern to the northern boundaries of the city, make up one of the most popular spots at the Baltic Sea.

Sopot beach, located in the centre of the curved shore of Zatoka Gdańska (Gdansk Bay), is spacious and wide enough to accommodate thousands of beachgoers. Water here is usually slightly warmer than at the beaches of Gdańsk and Gdynia, not to mention the areas open to the Baltic Basin.

The walking area at the back of the beach is a beautiful track behind the dunes, available both for pedestrians and bikers. It runs along the town next to some interesting examples of health-resort architecture.

Golden sand, good company and various attractions, it all makes the Sopot Beach one of the most popular and picturesque beach areas in Poland. 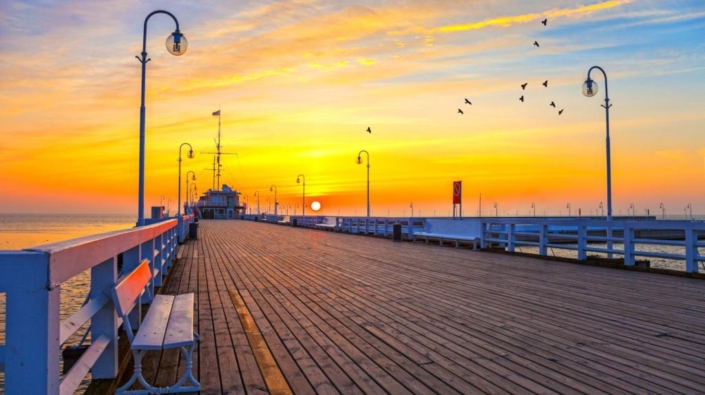 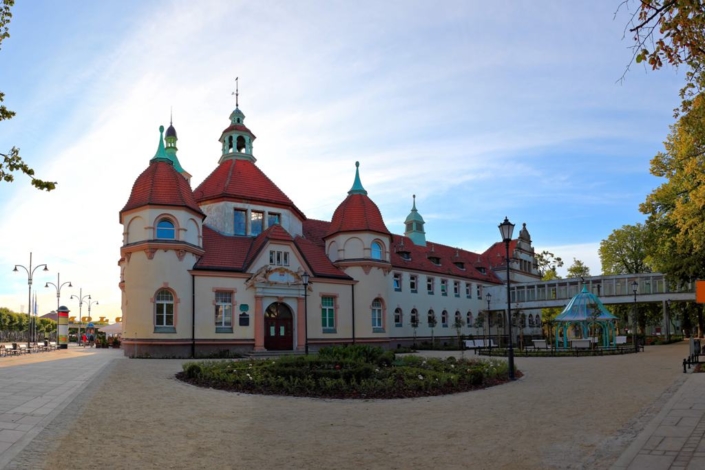 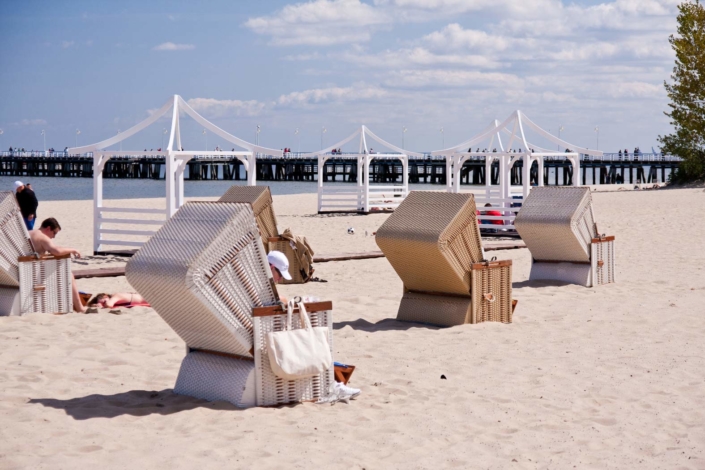