Worth to Visit in Warsaw

The Royal Castle dates back to the 14th century when a tower and wooden buildings stood here. The construction of the Castle in its current form began towards the end of the 16th century. King Sigismund III. ordered the expansion shortly after Warsaw became the capitol of Poland in 1596.

In the years 1945-1970, the Communist authorities delayed making a decision on whether to rebuild the Castle. The decision to do so was taken in 1971. Funds for the rebuilding of the Castle which took until 1980 were provided thanks to the dedication and persistence of the community and nation. In 1984 the reconstructed interiors were opened to the general public.

The main sights inside the castle are:

The Ballroom (Assembly Room) was already constructed under August III., but it was Stanislaw August Poniatowski who decorated it the way it looks today. It is the most beautiful room with its columns, mirrors and chandeliers.

The Throne Room with a throne standing in the middle of one side. It dates back to Stanislaw August Poniatowski. Shining red and gold makes it lovely place to spend some time. This room is connected to another small room at back containing the original floor.

The Marble Room was constructed during the reign of Wladyslaw IV, later portraits of Polish Kings were added to the room. Do take a look at the wonderful paintings on the ceiling.

The Canaletto Room hosts paintings by  Bernardo Bellotto done in the 18th century.  The pictures show scenes from Warsaw and are as detailed as one would expect from a picture. It is worth planning to stay here for a while to explore what Warsaw looked like back then.

The Knight’s Room was furnished under Stanislaw August Poniatowski. The walls are covered with huge oil paintings and in the middle if the room one can see the Statue of Chronos. 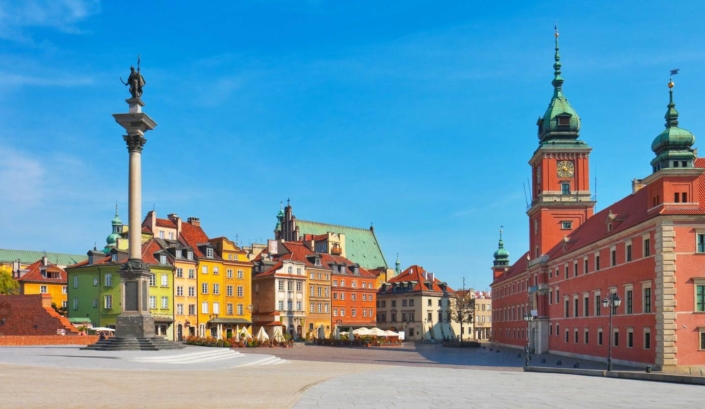 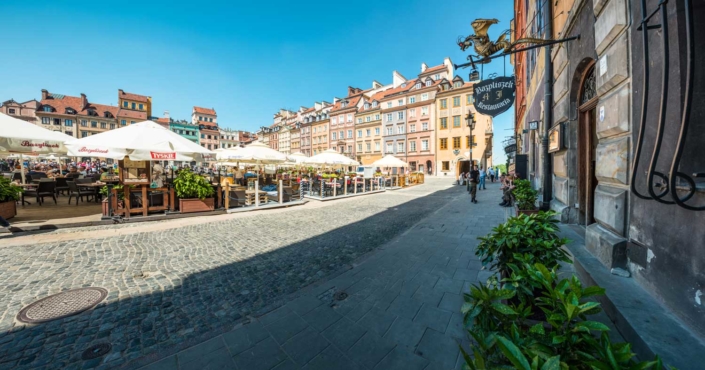 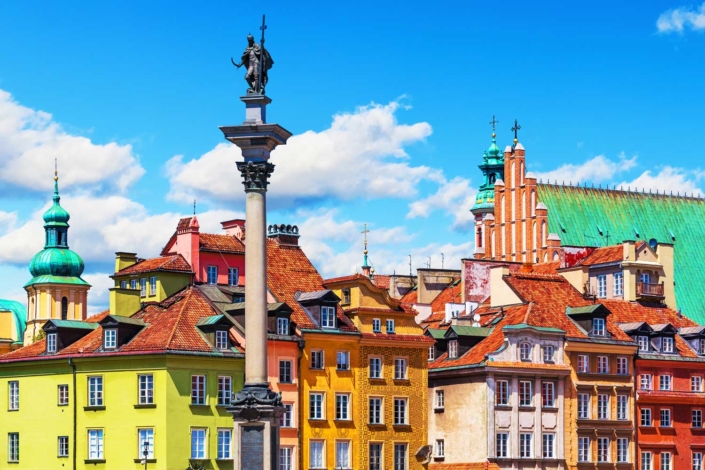 A UNESCO world heritage site, the Old Town will charm you  with its extraordinary atmosphere of narrow streets, and colourful old houses. During the Warsaw Uprising in August 1944, more than 85% of Warsaw’s historic centre was destroyed by Nazi troops. After the war, a five-year reconstruction campaign by its citizens resulted in today’s meticulous restoration of the Old Town, with its churches, palaces and market-place. It is an outstanding example of a near-total reconstruction of a span of history covering the 13th to the 20th century.

The Barbican was built in 1540 on the site of an earlier gate, probably in response to increased threat of invasion. It was an impressive bastion manned by fusiliers, surrounded by a deep moat, but its useful life was rather short. Not long after it had been built, advances in artillery made the Barbican obsolete, and it was used in actual defense of the city only once.

Apart from the royal apartments, the old seat of Polish rulers also houses an art collection with paintings by Rembrandt and Bernardo Bellotto, also known as Canaletto.

The Royal Łazienki was King Stanisław August’s summer residence, in which a classicist architecture is harmoniously blended with its natural surroundings featuring fabulous gardens.

Here, you can not only rest while watching nature, but also deepen your knowledge of the ideas of the Enlightenment by visiting such gems of the European architecture as:

The Palace on the Isle

The Palace on the Isle – one of the most valuable Polish historical buildings, housing the Royal Picture Gallery;

The Old Orangery, housing the Royal Sculpture Gallery with plaster copies of the most famous sculptures of the ancient world, and the Royal Theatre – one of the few original European 18th century court theatres;

The Myslewicki Palace, in which original polychromes by Jan Bogumił Plersch were preserved, including views of Rome and Venice;

The White Pavilion – the first building constructed in the Royal Łazienki by the initiative of Stanisław August – which houses the King’s Collection of Prints;

The Officer Cadets School with the Ignacy Jan Paderewski Room, and the picturesquely located Amphitheatre.

In the Royal Łazienki gardens, you can stroll on paths and alleys surrounded by trees, shrubs, and flowers. You can choose between the Royal Garden, the Romantic Garden, the Modernist Garden, as well as, the new Chinese Garden. The Deckchair Leisure Zone – located near the New Orangery – is also available.

The visitors to the Royal Łazienki may also experience high European culture with numerous cultural and educational events on offer. Among the best-known are the summer concerts near the Monument to Chopin, which take place on each Sunday from the beginning of May until the end of September.

These recitals have had a long tradition in the Royal Łazienki, and they are popular both among tourists and the inhabitants of Warsaw. The vast park surrounding the summer residence of the last Polish king, Stanisław August Poniatowski, is where Varsovians like to go for longer walks. The park is home to a winter garden, an amphitheatre, and even a Chinese garden. The biggest attraction, however, is the park’s permanent residents: the squirrels and peacocks. Another site worth seeing is the classicistic Palace on the Isle with its enchanting interior design and gallery of paintings. 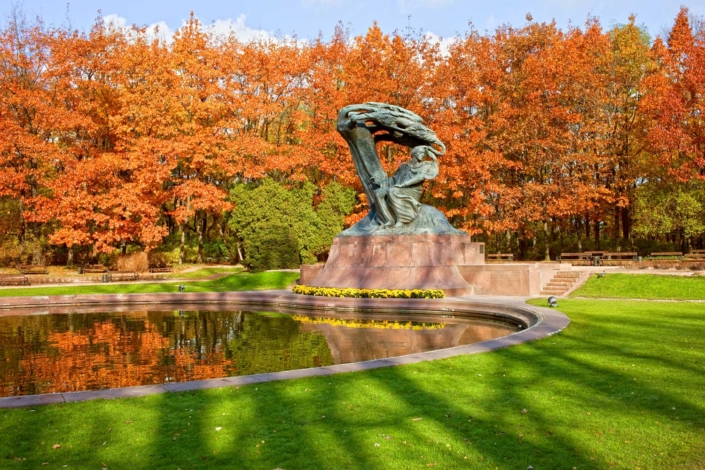 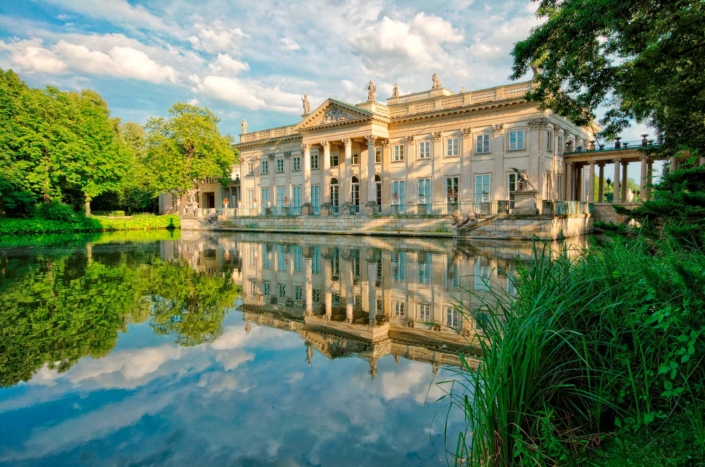 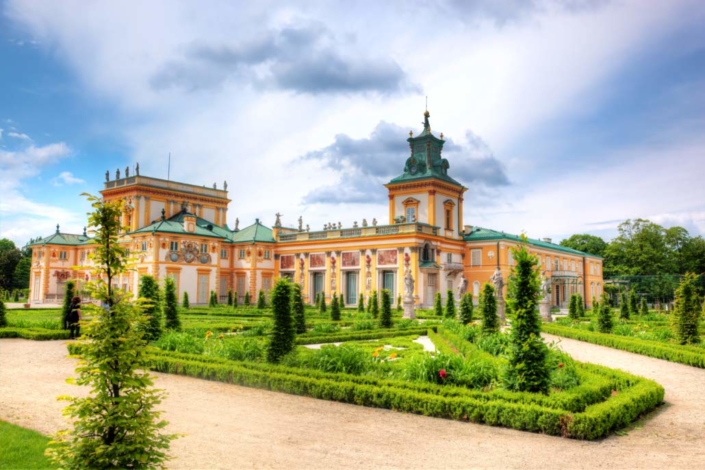 Wilanow Palace is called the “Polish Versailles” and is a true pearl of Baroque architecture in Warsaw. It used to be the residence of King John III Sobieski and is one of the most important monuments of Polish culture. The museum at the Wilanow palace is the oldest Polish museum of art.

This richly decorated building constructed with a flourish, along with the surrounding park, survived almost unchanged from the seventeenth century to the present day, despite two world wars which swept through Poland.

After the death of King Sobieski, the palace was inhabited by other well-known aristocratic families: the Sieniawskis, the Czartoryskis, the Potockis and the Branickis, and numerous upgrades were supervised by the best architects. The last owner, Stanisław Kostka Potocki, opened here the first public museum in Poland in 1805.

The park spreading out around the palace represents different styles: there is a bi-level Baroque Italian garden and a romantic English-Chinese park. A gondola moored at the Wilanów’s pond awaits tourists tired of sightseeing.

The Palace of Culture and Science

The Palace of Culture and Science is the most symbolic landmark in Warsaw. This symbol of the past has been turned into one of the  largest attractions of today’s Warsaw. The palace is a gift from the Soviet Union to the people of Poland.

Construction started in 1952 and took three years. Back then controversy erupted in Poland over the “gift” that society couldn’t refuse, as the whole country was dominated by Soviet Union.

Over 550 ornamental sculptures decorate the building. The monumental walls are topped with pieces of masonry copied from Renaissance houses and palaces of Krakow and Zamość. It took 3,500 Soviet workers to complete the 230 meter-tall building. Sixteen builders died during construction. Forty million bricks were used to build the Palace, which was also known as “the people’s castle”.

The building hosts various fairs, exhibitions, art shows and music events. The Palace is used for business and educational activities. This monumental building also includes a swimming pool, a concert hall, theatres and museums. The tower can be seen from many parts of Warsaw. The Palace of Culture is located near the central train station and the Złote Tarasy shopping center. Most of the tourists visit the Palace of Culture and Science to check out the 30th floor viewing platform, a perfect spot to admire panoramic views of the city. The surrounding area is filled with hotels, offices, and shopping centers.

The most famous events that took place in the Palace of Culture and Science were concerts by the Rolling Stones in 1967 and by legendary artist Leonard Cohen in 1985. During communist era Polish people didn’t have many occasions to see Western artists performing live on stage, so those two concerts were highly appreciated by the audience. Among other great artists who performed at the Palace of Culture and Science were Marlene Dietrich, Luciano Pavarotti, Eric Clapton and Tori Amos. 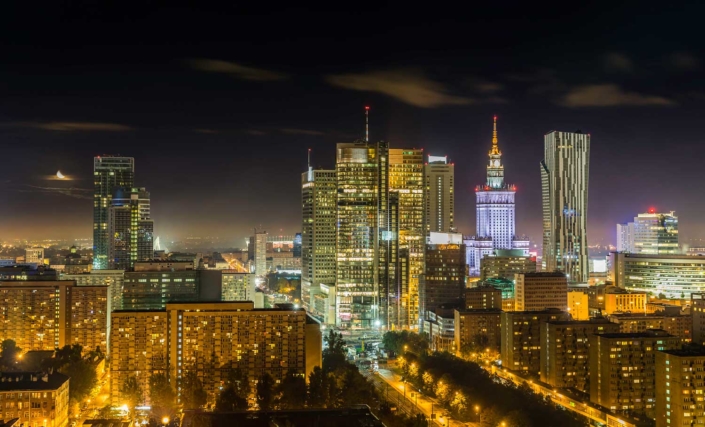