Worth to Visit in Cracow

The medley of Gothic, Renaissance, Rococo and Romanesque architecture that is the great Wawel Castle can be seen towering over the whole city. It was once the home of the Polish kings and queens, and still has great museums and court rooms as a testimony to its former glory.

The Renaissance palace you see today dates from the 16th century. An original, smaller residence was built in the early 11th century by King Bolesław I Chrobry. Kazimierz III Wielki (Casimir III the Great) turned it into a formidable Gothic castle, but when it burned down in 1499, Zygmunt I Stary (Sigismund I the Old; 1506–48) commissioned a new residence. Within 30 years, the current Italian-inspired palace was in place. Despite further extensions and alterations, the three-storey structure, complete with a courtyard arcaded on three sides, has been preserved to this day.

Repeatedly sacked and vandalised by the Swedish and Prussian armies, the castle was occupied in the 19th century by the Austrians, who intended to make Wawel a barracks, while moving the royal tombs elsewhere. They never got that far, but they did turn the royal kitchen and coach house into a military hospital and raze two churches. They also built a new ring of massive brick walls, largely ruining the original Gothic fortifications.

After Cracow was incorporated into re-established Poland after WWI, restoration work began and continued until the outbreak of WWII. The work was resumed after the war and has been able to recover a good deal of the castle’s earlier external form and interior decoration.

Hidden behind the old walls of the Wawel Castle, arguably the most important church in all of Poland can be found looming high with its Baroque and Gothic frontispieces.

The Royal Cathedral has witnessed many coronations, funerals and burials of Poland’s monarchs and strongmen over the centuries.

The present-day cathedral is basically a Gothic structure, but chapels in different styles were built around it later. Before you enter, note the massive iron door and, hanging on a chain to the left, huge prehistoric animal bones. They are believed to have magical powers; as long as they are here, the cathedral will remain. 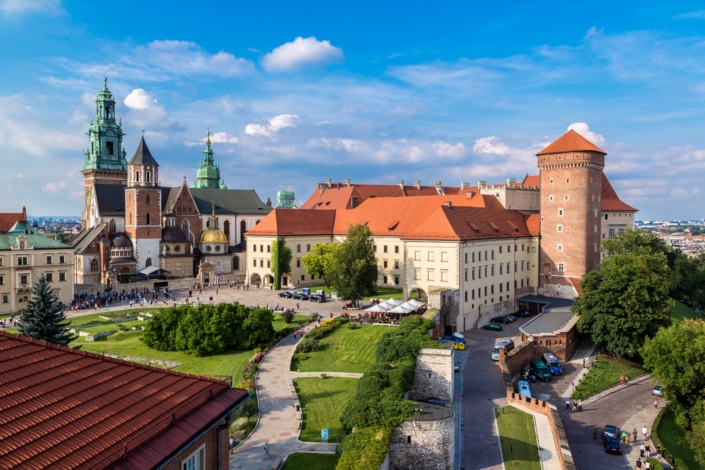 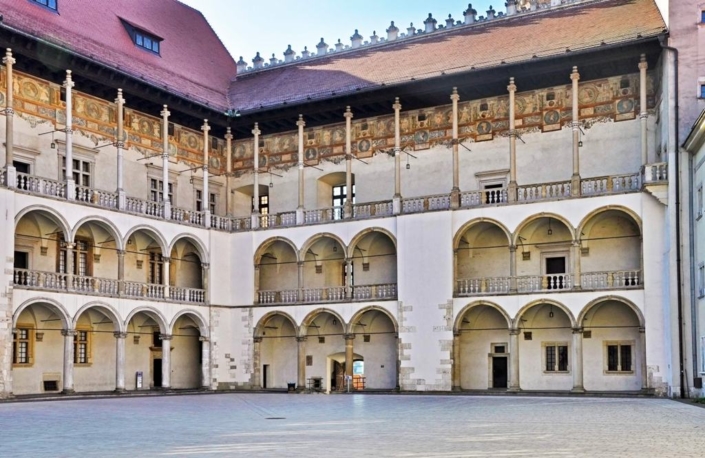 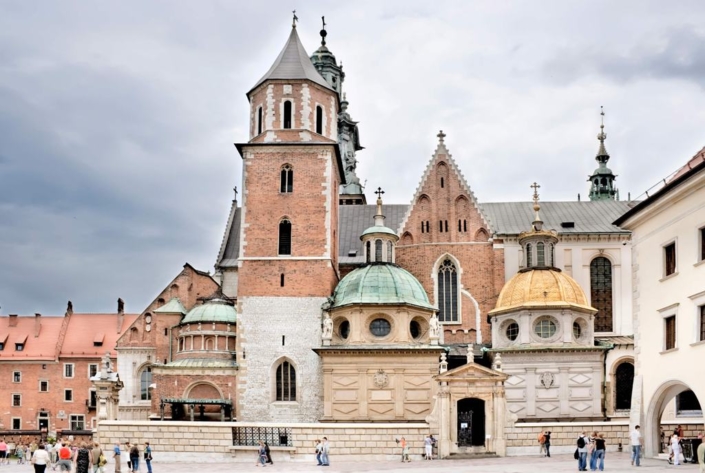 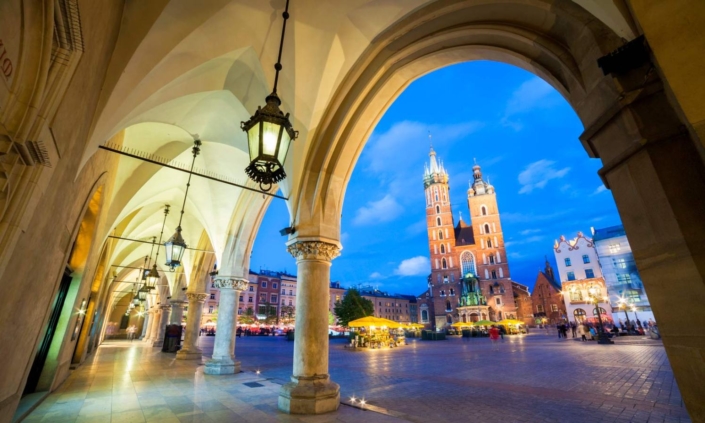 The largest medieval square in Europe, where you can find one of the symbols of Cracow, the Cloth Hall, as well as the Town Hall and houses bordering the square. One of the nowadays  addition to the square is the monument of Adam Mickiewicz, designed in 1898 by Teodor Rygier. In September 2010 under the Main Market Square, the biggest European underground museum was opened,  This fascinating attraction beneath the market square consists of an underground route through medieval market stalls and other long-forgotten chambers. The ‘Middle Ages meets 21st century’ experience is enhanced by holograms and audiovisual wizardry.

Hailed as the world’s oldest shopping centre, the Sukiennice has stood in the middle of the Krakow Market Square for centuries. Delve in to flit between the bustling souvenir stalls and their mounds of interesting folk trinkets, or stay outside to wonder at the handsome Renaissance architecture.

The Barbikan is the only remaining gatehouse of the medieval fortifications that once encircled the whole city. It’s redbrick bulwarks and formidable turrets helped to fend off the Mongol hordes during the 13th century. Today there are occasional theatre productions and other art shows hosted inside.

Looking wonderful in its Polish Gothic shell, St Florian’s Gate marks the start of the so-called Royal Route. Pass through and note the buskers that play everything from highlander folk to Dylan-esque country in the echoing tunnel, before heading into the Old Town in the footsteps of the erstwhile Polish kings.

Cutting through the very heart of the northern half of the Old Town district, the bustling drag that is Florianska Street hosts everything from craft beer bars to souvenir emporiums to vodka tasting joints. It’s one of the beating nerves of Krakow, and fills to bursting with visitors during the high season.

Overlooking Market Square in Cracow, this striking brick church, best known simply as St Mary’s, is dominated by two towers of different heights. The first church here was built in the 1220s and following its destruction during a Tatar raid, construction of the basilica began. Don’t miss the hourly hejnał (bugle call) from the taller tower. The main church entrance, through a baroque portal added to the southwestern facade in the 1750s, is used by worshippers; tourists must enter through the side door to the southeast. The chancel is illuminated by magnificent stained-glass windows dating from the late 14th century; the blue star vaulting of the nave is breathtaking.

On the opposite side of the church, above the organ loft, is a fine art nouveau stained-glass window by Stanisław Wyspiański and Józef Mehoffer. The colourful wall paintings, designed by Jan Matejko, harmonise beautifully with the medieval architecture and are an appropriate background for the high altar, which is acclaimed as the greatest masterpiece of Gothic art in Poland and allegedly designated the eighth wonder of the world by Pablo Picasso.

The altarpiece is a pentaptych (an altarpiece consisting of a central panel and two pairs of side wings), intricately carved in lime wood, then painted and gilded. The main scene, visible when the pentaptych is open, represents the Dormition (or Assumption) of the Virgin surrounded by the Apostles. The outside has a dozen sections portraying scenes from the life of Christ and the Virgin.

The altarpiece is topped with the Coronation of the Virgin in Heaven and, on both sides, the statues of the patron saints ofPoland, St Stanislaus and St Adalbert.

Measuring about 13m high and 11m wide, the pentaptych is the country’s largest and most important piece of medieval art.

It took a decade for its maker, Veit Stoss (known in Poland as Wit Stwosz), to complete this monumental work before it was consecrated in 1489. 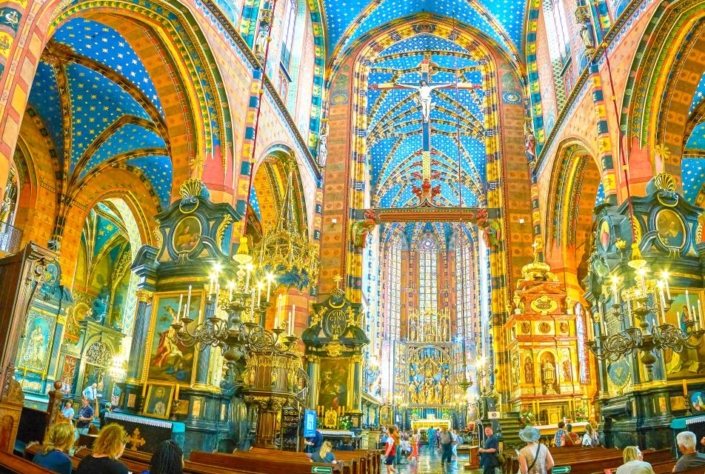 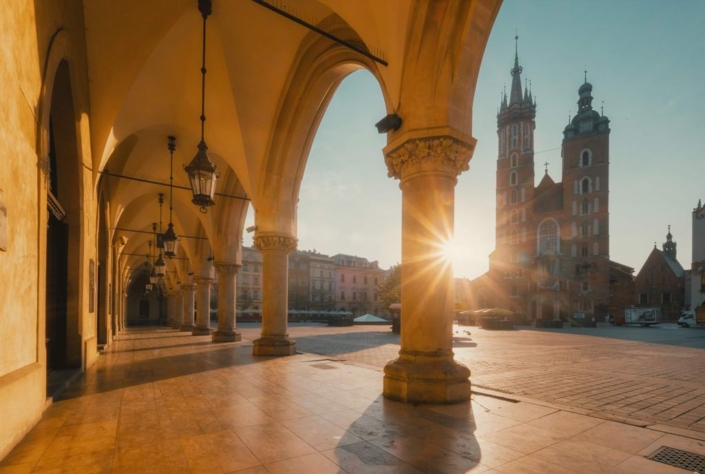 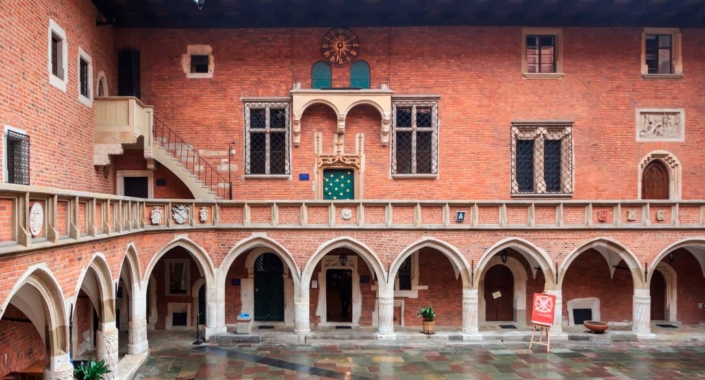 The Collegium Maius, built as part of the Cracow Academy (now the Jagiellonian University), is the oldest surviving university building in Poland, and one of the best examples of 15th-century Gothic architecture in the city.

It has a magnificent arcaded courtyard and a fascinating university collection.  You can visit the place only with the guided tour,  you’ll be shown half-a-dozen historic interiors, featuring rare 16th-century astronomic instruments used by star pupil Copernicus, as well as some of his manuscripts; a fascinating alchemy room; old rectors’ sceptres; and, the highlight of the show, the oldest existing globe (c 1510) depicting the American continent. You’ll also visit an impressive Aula, a hall with an original Renaissance ceiling, and crammed with portraits of kings, benefactors and rectors of the university (five of whom were sent to Sachsenhausen concentration camp in 1939). The treasury contains everything from copies of the 1364 university foundation papers and Jan III Sobieski’s hammered silver table to film awards (including an Oscar) given to director Andrzej Wajda.

Set within walking distance of the Old Town, the historic Jewish Quarter of Krakow was once a separate city in its own right.

Today, it’s totally subsumed into the fabric of the town, but still retains a unique culture and vibe with its crumbling tenement blocks, great synagogues and oodles of cool bohemian beer joints.

Kazimierz is the district located south of the Old Town between the Wisła River and ul. Dietla. Formerly, for over 500 years, it was the centre of Jewish life in Cracow. Starting from the 1990s, Kazimierz became  most exciting district of Cracow, full of  historical buidings, atmospheric cafes and art galleries. Well-known for its associations with Schindler and Spielberg, traces of Kazimierz’s Jewish history survived, therefore you can find there may synagogues and Jewish cemeteries.  Centred around the former Jewish square known as Plac Nowy, Kazimierz has emerged as the city’s best destination for cafe culture and nightlife.

Among the most popular places in Kazimierz district you may find Szeroka street, who is more a square then street and previously played role of medieval marketplace were Kazimierz’s first Jewish merchants settled.  Here you can find, the city’s most important synagogues,  the Old Synagogue and the Remuh Synagogue, whose historic cemetery extends  neighbouring streets. 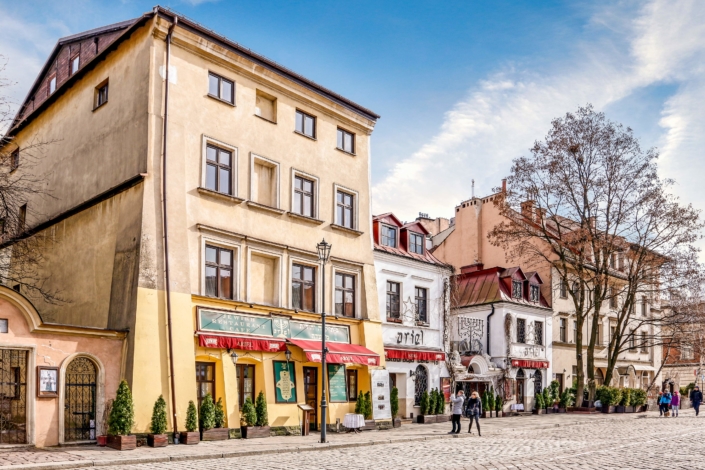 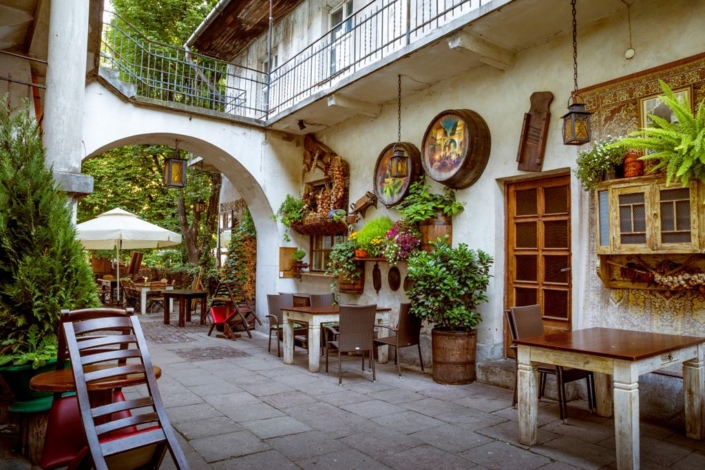